“This has made the three crore people of this state feel proud”,said the CM Das adding that tourism has huge opportunities in Jharkhand.”The state government is committed to promote tourism so that the tourists from across the country and abroad can visit Jharkhand “,he said.

“By highlighting the cultural background and practices of the state,the public relation department has done commendable job”,he said.

Incidentally,the Union Defenece Ministry had given consent to display Maluti Temples as the state’s tableau after a number of tests.The PRD Department had organised tableau displaying tribal jewelleries with the result that the tableau from Dumka got the first prize and its counterpart in Ranchi received third prize.Both the CM Das and Governor Syed Ahmed had awarded the PRD led by its Secretary mast Ram Meena and its Director A.K.Pandey who had played a key role toward these achievements. 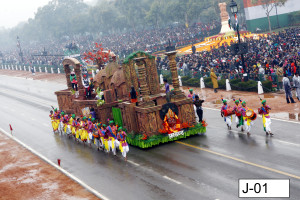 Plan to set up biomedical waste treatment plant near Ranchi