Top brass of the Jharkhand Mukti Morcha today staged a protest against Land Acquisition Ordinance brought in by the Bharatiya Janata Party-led National Democratic Alliance (NDA) government at the Centre.

They lodged the protest in Ranchi today when they met the Governor Syed Ahmed and demanded its nullification.

The ordinance aimed to amend the Right to Fair Compensation and Transparency in Land Acquisition, Rehabilitation and Resettlement Act, 2013,said the agitators.

Speaking on the occasion,JMM leader and former Chief Minister Hemant Soren said, in the name of clearing procedural hurdles in land acquisition process, the Union government, through the ordinance route, had relaxed the requirement of consent and social impact assessment survey for projects in defence, rural infrastructure, affordable housing, industrial corridors and social infrastructure sectors.

This can not be tolerated in Jharkhand where the land laws-CNT Act and Santhal Pargana land Tenancy Act-don’t allow sale and transfer of land.The ordinance was against the interests of farmers and would benefit large corporate companies, he said.

In a memorandum to Governor Ahmed,JMM led by Soren has demanded that he should send its appeal to the President of India,seeking its annulation.”It was unfortunate that the ordinance was passed without any debate in Parliament. Even farmers were not consulted before getting the ordinance passed”, he said. 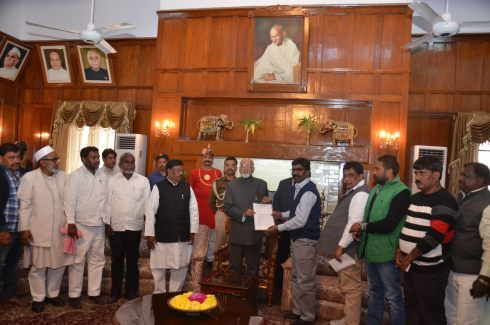 Bihar yet to hand over cadastral maps to Jharkhand

Give clear mandate to BJP for development, appeals Modi