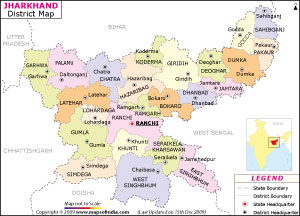 Jharkhand is the 28th state of the India Union located in East India. Earlier the state was a part of Bihar; but by the Bihar Reorganization Act, Jharkhand was given statehood on 15th November 2000. Some of the major districts of Jharkhand are Jamshedpur, Lohardaga Hazaribagh, Bokaro, Dhanbad, Sindri, Deoghar, and Gumla. A glance at the district maps of Jharkhand can help one in knowing about the various districts and their location in the state. The name Jharkhand is derived from the Sanskrit word Jharikhanda, which was the ancient name of the dense forest of the region.

Jharkhand is surrounded by Orissa in the South, Uttar Pradesh and Chhattisgarh in the West, Bihar in the North and West Bengal in the East. The state largely consists of forest tracks of Chhotanagpur plateau and Santhal Pargana and has divergent cultural tradition and practices. One of the major firms in India Tata Steel has its corporate office in Jharkhand.

Jharkhand at a Glance