And in both these places,the response of the Congress led regime towards the goal of carrying out relief operation in flood ravaged Uttarakhand has been almost similar.

In Jharkhand,a chopper with a team headed by Principal Secretary Sajal Chakravorty rushed to Dehradun to rescue the victims rapped in Uttrakhand.The team reportedly carried out sorties and rescued 30 odd people.But now when a week had elapsed and the team wanted to continue the rescue work,it had run short of cash.

”There was no cash to put feul in the chopper”,said one of the team members who was planning to return.Chakravorty,who was incharge of civil aviation department in Jharkhand, was not available for comment.

But a sweeper in the Project Bhawan in Ranchi took a dig at the chopper team.”Before rushing to Uttrakhand,the rescuers should have planned in advance about all these.Their shortsightedness shows the way the government is run in this state,”giggled the sweeper.

Similarly,the trucks carrying relief material for Uttrakhand flood victims,which were flagged off by Congress president Sonia Gandhi and her son Rahul in New Delhi under the spotlight of the national and international media on Monday ,are yet to reach the victims.

The vehicles had run out of diesel and are standed in Rishikesh and Dehradun,it is learnt. 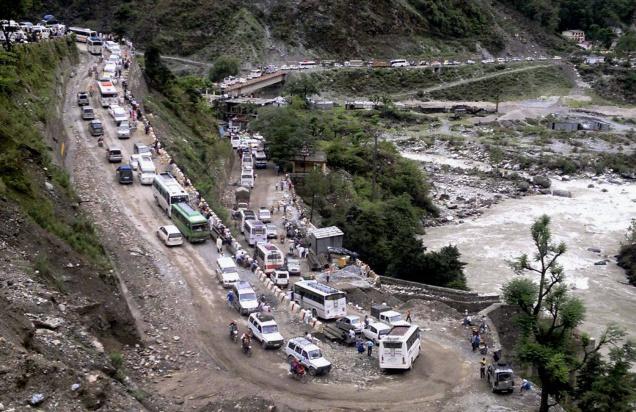 Reports said the trucks ran out of diesel and drivers did not have money to refuel.”each.” Each driver was handed Rs.2,000 cash for fuel, which is apparently over”,said a India Today report.

“In a ceremony organised at the party headquarters in New Delhi on Monday, Sonia Gandhi had flagged off 24 trucks in addition to 125 carriers for the flood-ravaged state.”

“Taking a dig at Congress over the mess, BJP leader Prakash Javadekar said the party’s seriousness towards the calamity can be understood from this incident. Javadekar said no party should try to gain political mileage from the flood.BJP president Rajnath Singh also attacked the Congress for indulging in vote-bank politics.”

RMC plans to use IT to approve building plans quickly