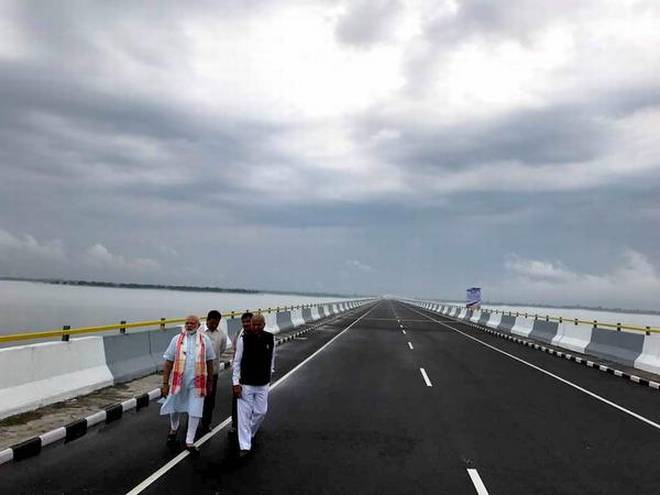 The bridge, inaugurated by Prime Minister Narendra Modi on Friday, will reduce the travel time between Assam and Arunachal Pradesh from six hours to just one hour.

Prime Minister Narendra Modi on Friday inaugurated the country’s longest river bridge — the Dhola-Sadiya bridge — across the Brahmaputra in Assam.

He named the bridge after iconic singer Bhupen Hazarika, after the Patriotic People’s Front Assam (PPFA) recently issued a statement saying that the “cultural icon can be identified as a man of assimilation, who connected various big and small communities of the region like a golden thread”. The Arunachal Pradesh Literary Society (APLS) too agreed with this statement.

The 9.15-km-long Dhola-Sadiya bridge will reduce the travel time between Assam and Arunachal Pradesh from six hours to just one hour as the distance will shrink by 165 km. “This is one of the most important infrastructure projects in our nation,” Mr. Modi had said.

Mr. Modi will also lay the foundation stone for two key projects — an AIIMS and an Agriculture Research Institute. “Both projects will quicken the development of Assam & the Northeast,” Mr. Modi had tweeted.

After inaugurating the Rs. 2,056 crore bridge at Sadia in Assam’s Tinsukia district, Mr. Modi walked a short distance over it.

Bearing in mind the necessity for quick movement of troops and artillery to the border state of Arunachal, the bridge has been designed to accommodate the movement of tanks, according to official sources.

It’s made of SAIL steel

The Steel Authority of India Limited has supplied around 90 per cent, or around 30,000 tonnes of steel, including TMT, structurals and plates, for the construction of the bridge.

“The product mix offered by SAIL was one of the major criteria for selection of the company for this prestigious project. The construction of the bridge began in 2011 under the public-private-partnership, which is 3.55 km longer than Mumbai’s Bandra-Worli Sea Link, making it the longest bridge in India,” said SAIL.